Use Discount Code GBRTD for a 15% Site wide sale 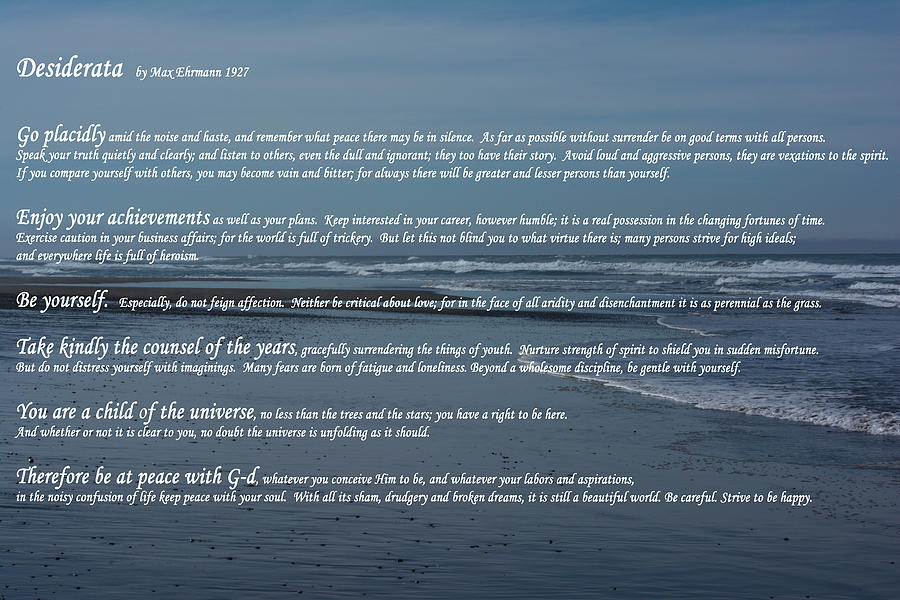 What a better place for timeless words than on the scene of a timeless beach, forever reaching out repeating the same rhythm of life without pause.

The Confused History of "Desiderata"

The author is Max Ehrmann, a poet and lawyer from Terre Haute, Indiana, who lived from 1872 to 1945. It has been reported that Desiderata was inspired by an urge that Ehrmann wrote about in his diary:

"I should like, if I could, to leave a humble gift -- a bit of chaste prose that had caught up some noble moods."

Around 1959, the Rev. Frederick Kates, the rector of St. Paul's Church in Baltimore, Maryland, used the poem in a collection of devotional materials he compiled for his congregation. (Some years earlier he had come across a copy of Desiderata.) At the top of the handout was the notation, "Old St. Paul's Church, Baltimore A.C. 1692." The church was founded in 1692. [1]

As the material was handed from one friend to another, the authorship became clouded. Copies with the "Old St. Paul's Church" notation were printed and distributed liberally in the years that followed. It is perhaps understandable that a later publisher would interpret this notation as meaning that the poem itself was found in Old St. Paul's Church, dated 1692. This notation no doubt added to the charm and historic appeal of the poem, despite the fact that the actual language in the poem suggests a more modern origin. The poem was popular prose for the "make peace, not war" movement of the 1960s.

When Adlai Stevenson died in 1965, a guest in his home found a copy of Desiderata near his bedside and discovered that Stevenson had planned to use it in his Christmas cards. The publicity that followed gave widespread fame to the poem as well as the mistaken relationship to St. Paul's Church. [1]

This misinterpretation has only added to the confusion concerning whether or not the poem is in the public domain.

By the way, Desiderata is Latin and has been interpreted as "Things to be Desired" or "Things Desired As Essential."

Wonderful presentation of a favorite collection of words.